Americans consume about 57 pounds of beef and veal per person per year. How much of the beef was in the form of a steak is hard to calculate, but judging from the popularity of steakhouses around the country and the variety of steaks sold in supermarkets and butcher shops nationwide, it must be quite a lot.

Taste in steaks varies, of course. People like different cuts of meat, different degrees of doneness, different seasonings. Some steak lovers go for filet mignon or tenderloin. Others swear by strip steaks or ribeyes, T-bones or porterhouses.

Cooking steak at home ought to be a straightforward process. A nice cut of meat, a hot pan or grill, some cooking fat or oil, some seasoning….what could be hard about that? Yet home cooked steaks rarely offer the juiceness and intensity of flavor that restaurant steaks do.

There are several reasons for this, not least of which is that restaurants are usually able to source meat of higher quality than the average consumer can buy. But home cooked steaks often fall short for other smaller reasons that are easy to correct. Here at Wiseguys we have assembled a list of 11 steak mistakes, together with advice on how to avoid them when cooking at home.

1. Buying the Wrong Cut of Meat

Just because it’s called “steak” doesn’t mean that a cut of meat will turn out tender and flavorful when it’s grilled or sauteed. Top round and bottom round steak, for instance, are lean and tough and are best cooked by braising and slow cooking in liquid. Flank steak is another chewy cut, which can indeed be grilled (or broiled), but needs to be marinated first and then sliced thinly against the grain. The best cuts for quick and simple preparation include strip steak, T-bone, porterhouse, ribeye, and filet mignon.

One of the delights of a well-cooked steak is a crusty, caramelized exterior. Blotting both sides of the meat with paper towels before cooking helps the crust form through the chemical process called the Maillard reaction, which won’t happen if there is too much moisture.

3. Cooking It Straight from the Refrigerator (Maybe)

This one is contentious. The common thought, as relayed by such authorities as Bon Appetit and Delish, is that you should always leave your steak out for 30 minutes or so, so that it comes to room temperature. This is said to make it easier to cook evenly. However, the science behind this theory is shaky. First of all, it takes longer than half an hour to thoroughly bring a good sized steak to room temperature. And experiments have shown that cooking a steak cold yields basically the same results as cooking one that has warmed up. At Wiseguys we have our own time tested formula. But what should the home cook do? One thing that is true is that cold meat can seize up and toughen when heat is applied, so we concur with most authorities on this one and recommend you take it out of the refrigerator 20 minutes or so before cooking so that the surface isn’t chilled.

4. Using the Wrong Kind of Pan

Non-stick pans, stainless steel pans, enameled pans….they’re all useful cooking tools for various purposes. Cooking steak is not one of them. If you can’t char your steak on a grill, the best pan is a cast iron one. Cast iron pans heat evenly and can stand up to very high heat. They require less oil or other cooking fat and become naturally non-stick over time. They also go easily from stovetop to oven, and this is essential if you’re cooking your steak with the pan-to oven method. This method involves searing the steak for a couple of minutes on each side, then finishing it in the oven. (About 15 minutes at 350 degrees will bring an inch-and-a-half thick steak to rare).

Season your steak with more salt (kosher sticks better) than you think it needs and with plenty of freshly ground black pepper. Some of it will come off as you cook the meat anyway, especially if you’re grilling it. Remember that you’re only salt-and-peppering the surface of the meat, and when you take a bite of a nice thick steak, you’ll want enough seasoning to enhance the whole thing. Many chefs even season generously before cooking and then season again when the steak comes off the fire.

6. Not Getting the Pan Hot Enough

One reason that steakhouse steaks usually taste better than home cooked ones has to do with the intensity of the heat with which the steak is cooked. Steakhouses that broil generally do so at temperatures from 750 degrees to 1800 degrees, while the average home range seldom gets hotter than 550 degrees. Restaurant grills and stovetops are usually considerably hotter than their home equivalents, too. You probably won’t be able to compete with the level of heat, but do get your own pan or grill (or oven) as hot as you possibly can if you want that caramelized crust.

7. Using Oil or Fat With a Low Smoke Point

Smoke point is the temperature at which a cooking oil or fat begins to smoke. If you’re planning to sear your steak for a couple of minutes on each side and then finish it in the oven, and if you don’t mind potentially setting off the smoke alarm, then extra virgin olive oil or butter, both of which have a smoke point of around 350 degrees, are fine to use. If you’re cooking the meat in a pan straight through, you’ll want something with a higher smoke point, like clarified butter, peanut oil, or corn oil, all of which begin smoking at 450 degrees. Safflower oil, whose smoke point is the highest of any common cooking oil, begins smoking at 510 degrees. This is not just about setting off the smoke alarm; smoking oil or fat breaks down and releases free radicals and a liquid called acrolein, which gives burnt foods a nasty flavor and aroma.

8. Not Turning Your Steak Enough

More controversy here. The conventional take is that a piece of meat, steak, or otherwise should be turned only once while cooking, something about the way juices move around the meat. Studies have shown this is basically nonsense, and that flipping the steak numerous times can speed up the cooking process (by as much as 30%) and also cooks the meat more evenly. (Use tongs to turn the meat, not a fork; if you perforate the steak, you’ll lose some of those precious juices.)

There is, as they say, no accounting for taste, and some people like their steak well done (grayish brown inside, with no hint of pink). There’s nothing wrong with that, as long as you enjoy dry, less-than-flavorful meat. Many steak lovers prefer their meat rare or medium rare, however. Being able to cook meat the way you like it is a matter of experience. One burner or grill may be slightly warmer or cooler than another and steaks are cut to different thicknesses, so a certain amount of trial and error is inevitable. As a general rule, however, a steak that’s about one-and-a-half inches thick needs roughly 10 minutes of total grill or stovetop cook time for rare, 12 or 13 minutes for medium rare. Using a meat thermometer is always a good idea. An internal temperature of about 120 degrees for rare, 130 degrees for medium rare.

10. Not Resting Before Serving

The steak is off the grill or out of the pan and smells so good you can’t wait to dig in. But you should wait. Put the meat on a warmed plate and just let it sit a few minutes, at least three or four, maybe a few more. If you cut into a steak as soon as it’s finished cooking, juices will leak out, but if you give it a little time, the juices will be reabsorbed into the cells of the meat, leaving it juicier.

11. Not Taking Advantage of Pan Drippings

While your steak is resting you have one more opportunity to create more flavor. Instead of washing out the pan, use those delicious pan drippings for the perfect sauce. By adding liquid  to your pan, you can bring up all of that crispy, caramelized goodness and turn it into a phenomenal sauce to drizzle over your perfectly seasoned and cooked steak.

For a quick fix, just add water to the pan (after pouring off any excess fat) and reduce the liquid over medium low heat. Emulsify in a knob of butter and you have pan sauce.

Preparing steaks to perfection at home can seem daunting. It’s expensive to buy a great cut of steak, and the last thing you want to do is mess up the preparation. By following our tips, you’ll be well on your way to cooking perfect steak with confidence and ease.

Not feeling like working in your kitchen tonight? Join us at Wiseguys for an incredible steak dining experience. 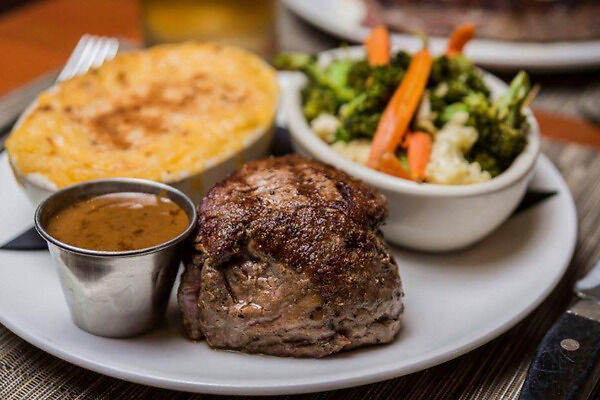 Have you ever been stumped reading a restaurant menu and were unsure of the different cuts of steak? Here at Wiseguys, we’re going to deliver a great, flavorful steak….but do you want a beefy ribeye or a tender filet mignon? Today, we want to shed some light on the topic.